We’ve all heard about the brouhaha about how mobile usage will take over desktop particularly starting in 2014. That’s why businesses have started giving more focus on making their strategies compatible to mobile devices.

But that’s only for huge businesses.

Small and medium-sized businesses apparently are rather behind their larger counterparts when it comes to going mobile. In 2014, SMBs say they plan to focus on establishing more of their online presence, whether through blogging, social media marketing or any other web-based campaigns.

So why aren’t they joining the mobile revolution?

j2 Global’s research, as reported by eMarketer.com,  indicated that a common increase in online presence, including things as basic as setting up a website or online store, was the top priority for 2014 for nearly three in 10 SMB professionals surveyed. Automating marketing email function was the No. 2 priority for the group; while a comparatively small 13.4% were focused on mobile—one of the key areas of growth for marketers are larger firms. 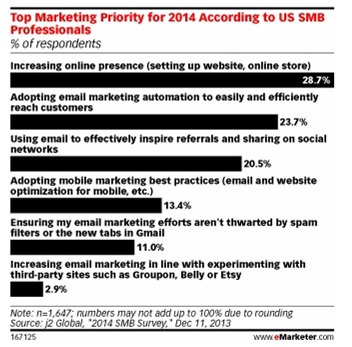 “More than 45% of the US population will use the mobile internet at least monthly this year, eMarketer estimates, a figure set to rise to nearly two-thirds by 2017.

But small businesses have been slow to go mobile—not just in their advertising efforts, but even in something as basic as creating a mobile-optimized website that will put them conveniently in the hands of consumers on the go,” the article says.

This goes to show that not all sectors of the business chain are able to go with the changing times. Or it could be that they are able, but choose not to, because they feel that other important matters are to be prioritized.

SMBs have different perspectives in their lead generation efforts compared to the big guys.

Perhaps they figure that they need to establish a solid online first; once they achieve that, only then can they start appreciating the role of mobile in their campaigns. This is understandable, considering that mobile optimization does involve a hefty budget, not to mention the need for expertise in the process of integrating mobile in their marketing mix.

While big companies have the luxury of having the dollars for mobile migration, SMBs would just have to build  around what they do best – lurking around cyberspace and making a name for themselves.