One the essential survival functions for Business-to-Business (B2B) companies is lead generation. They are in constant hunt for new prospects that can use their products or services and keep the business running. But, as it turns out, lead generation is not only an important operation; it’s also the biggest challenge among B2Bs.

BtoB Magazine (btobonline.com) conducted a survey among US B2B marketers and found that 60% of the respondents said that generating leads is their biggest challenge in 2013. This is consistent with the findings when the study was also conducted in 2012. 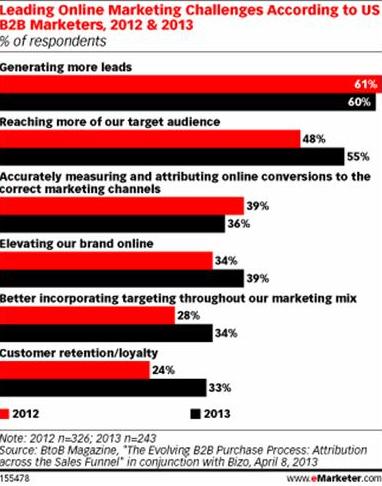 Also noticeable in the study is the big surge in the challenge posed by customer retention or loyalty, which jumped from last year’s 24% to this year’s 33%. They also consider the incorporation of targeting in their overall marketing plan as an increasing problem, from 28% to 34%. If you think about it, both these surges can be attributed to the rise of competition (thus making customer retention hard) and the ever-changing preferences of prospects (which hampers target marketing).

But why is generating more leads perceived as the biggest challenge?

One of the possible explanations can be seen on the graph itself. For both 2012 and 2013, the second biggest challenge is reaching the target audience, which makes sense to the fact that B2B lead generation is giving them a tough time. Not being able to send the message to the desired people ultimately cripples the very purpose of marketing, and with that being the case, where would the leads come from?

Another possible reason is the type of B2B lead generation tactic they use. Perhaps companies have become so overwhelmed with social media thinking that it will deliver all the leads right at their doorstep. Or maybe they’re just not creating content that engages prospects and facilitates conversion. If they’re dependent on search, perhaps they need to optimize their sites more meticulously.

This study can either be a testament to the fact that B2B lead generation itself is no easy task, or a constant reminder that every other endeavor that revolves around it has a long-term impact. Let’s see what 2014 has in store.

How To Be Efficient In Appointment Setting, One Step At A Time The True Definition of “Engagement” in B2B Marketing
Scroll to top