You know you’ve hit big time when your app has been installed on twice as many phones (and counting) as that phenomenal dating app Tinder, doubled (and will probably rival) the engagement of Snapchat, and has more daily active users than Twitter. That’s how huge this Niantic-developed free-to-play game is, and it’s not showing signs of slowing down. In fact, it’s only revving up its engine as it has yet to be launched in some countries. Yes, it could be just a fad, but it could be the biggest fad in a while judging by how the world has reacted to its virtual presence.

It’s a stretch to say it’s revolutionary, but at the same time, it would also be unfair to claim it isn’t. When businesses left and right are cashing in on some game about pocket monsters and balls, somebody must have done some good marketing. Let’s break it down.

There are probably more than a dozen factors that contribute to the Pokemon Go phenomenon, but let’s reduce it to three most important dynamics: the rave about augmented reality, it’s packaging as an “active” role-playing game, and its history of success.

Most of us want to escape reality, even for a while, and be somebody we desire or idolize or do something out of the ordinary. That’s why we watch movies and TV series. Escapism is a way of life. And then come these geniuses who develop better and better ways to improve our means to escapism. While Augmented Reality (AR) isn’t a new thing altogether, it’s something that still fascinates us especially when there are breakthroughs.

Notice how Snapchat became all of sudden? It’s because it offers features that other social platforms don’t have – augmented reality. Or better yet, the seamless fusion of real and virtual. Who hasn’t tried face-swapping or putting on some (or all) of those filters and shared them with friends?

Pokemon Go took full advantage of our enthrallment to AR and took it a whole notch higher. It’s surreal and addicting because it gives users a chance to be “one with the virtual universe”. Those who find happiness in simple things can even enjoy making those little monsters appear as if they are part of the real, physical world, on their phones and tablets. It’s in this sense that Pokemon Go appeals most to its users. 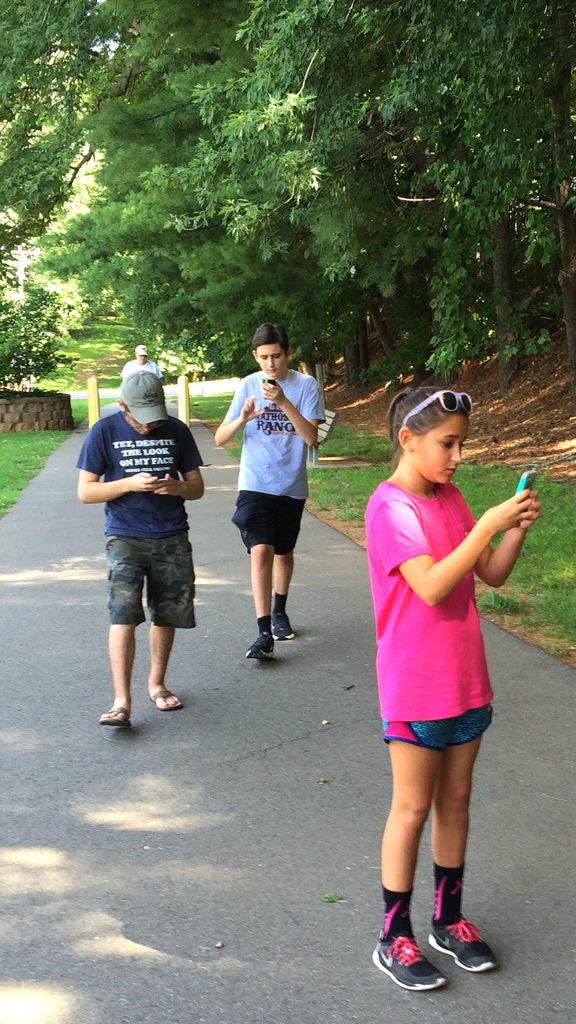 Pokemon Go, while being widely and mistakenly attributed to Nintendo, is actually the brainchild of the people at Niantic, who started at Google. Specifically, Google Maps. The Pokemon Go idea was actually born as an April Fool’s Day joke by some Niantic guy who thought it would be awesome to see Pokemon randomly pop out of Google maps.

So yeah, unlike most role-playing games that promote a sedentary lifestyle, Pokémon GO requires users to move around, even get out of the house, and do legwork. Because how else can you hunt down Pokémon?

Aside from capturing Pokémon, Pokémon Go also gives you eggs to take care of. But these are special eggs. If you’re used to playing games that require you to buy coins or cards to unlock something, these eggs are different – they must be walked to hatch. But these eggs must be walked to hatch. Some require kilometers of walking. And because the developers have foreseen the possibility that some lazy genius would use a car to hatch his egg, the app knows when you’re driving and voids that distance. Oh, and why are the eggs special? Some of these eggs may turn into a very rare Pokémon not available in their area. As of this writing, a British Pokemon Go player was able to catch all 142 UK Pokemon plus one of the four region-locked Pokemon only found in North America, which he claimed he hatched from an egg. See?

Many see this as hitting two birds with one stone (or Pokemon ball), because well, how else can one do both the things they love and loathe at the same time?

Related: What CEOs Can Learn From “Dumb Ways to Die”

Another factor that cannot be taken for granted in the success of Pokémon GO is its ability to tap into an already popular game – Pokemon. Nintendo executives say Pokemon was its second most popular game, next only to Super Mario. That in itself is already a huge headstart if you’re thinking about creating another pop culture phenomenon of a game.

Related: How NOT to Market your Product: 9 of the Worst Branding Failures

Obviously, there’s already an existing market for the game, which reached its peak in the late 90’s and early 00’s. The strategy really isn’t as complicated as the game. In fact, it’s as simple as instant coffee, where instead of pouring hot water in your cup, you just add augmented reality and social shareability.

To be the very best, you'll need battery power. RT for your chance to win a #TPLINK power bank #PokemonGO pic.twitter.com/3gvYTzNBbv

The bottom line is, all three factors have one thing in common: they all connect to the user in a way no other app or game ever has.

The Crucial Benefit of Telemarketing Services in the Field of Healthcare